Chipotle’s Scarecrow video and game app is an effort to influence your decisions and emotions.  If you haven’t seen the video, you can view it here:

The video went viral with almost 6 million views on youtube and received wide critical acclaim for the video production quality.

The Week’s Peter Weber calls it “the most beautiful, haunting infomercial you’ll ever see.”  Read Peter Weber’s Review to see the rest of his opinions on the advertisement.
On the other hand, Funny or Die has produced a scathing video parody of  Scarecrow.  You can watch that video along with commentary by Scott Meslow here:
Critics of the Scarecrow campaign believe Chipotle is misleading consumers by displaying an inaccurate view of current factory farming practices.  Others believe Chipotle is attempting to make changes to current practices by increasing awareness.  Chipotle chief marketing officer Mark Crumpacker states in a USA Today article, “We’re trying to educate people about where their food comes from.”

Human beings make decisions based on emotions.  Chipotle’s Scarecrow is a classic attempt at generating an emotional response in individuals that will lead to buying decisions that are favorable to Chipotle.  The rebuttal videos and commentaries are attempting to generate emotional responses that will lead to buying decision that are unfavorable to Chipotle.

Where do you stand?  Is Scarecrow unethical, or is it exactly the same as any other type of marketing we are exposed to everyday?

https://uptowndallascounseling.com/wp-content/uploads/2013/04/Holly-Scott-Logo-150.png 0 0 Holly Scott https://uptowndallascounseling.com/wp-content/uploads/2013/04/Holly-Scott-Logo-150.png Holly Scott2013-09-25 17:10:002014-02-11 04:41:10Decisions and Emotions
Have you ever been trying to make a decision and thought to yourself, “I wish I could just leave my emotions out of this, and decide on a logical basis!”  It is a widely accepted theory that humans’ feelings and emotions cloud and hinder their decision-making abilities. Scientists have been able to prove this theory wrong.

Further post-surgical tests found Elliot was incapable of  possessing and expressing emotion.  His brain was no longer able to access the opinions and ideas created over his lifetime that guided his actions in the past. By studying Elliot’s and several other patient’s brains, scientists have determined that the combination of emotion and judgment creates the foundation for a decision.  Without our emotions, we have no means to decide what is logical and what is not. Humans are not irrational, we are emotional. Our emotions do not obstruct our logic, they create it.  Savannah Krantz (Greenhill, 2014) writes a more detailed accounting of Damasio’s research and findings below: 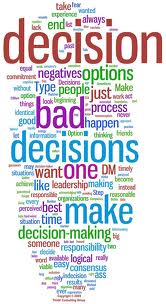 In 1982, Antonio Damasio, a neurologist, discovered a patient named Elliot who was incapable of making decisions. This peculiarity was acquired during the removal of a brain tumor near Elliot’s frontal lobe. The frontal lobe is the part of the brain tasked with decision making. After Elliot’s surgery, his daily routine became impossible. Simple and quick errands turned into long and difficult ordeals. However, his intelligence level and cognitive skills had not been damaged by the surgery. If his IQ was well over high enough for him to be able to make decisions, why couldn’t he? Imagine not being able to make simple decisions such as what clothes to wear, what food to order, and when to schedule an appointment. What exactly in his brain had caused this massive obstruction in his life?
Elliot was emotionless. Damasio ran a series of tests, and none of which triggered Elliot to feel any form of emotion. How could he have the ability to make a decision with no feelings to base the decision off of? Elliot’s tests did prove a common fallacy, humans are irrational, wrong. It is a widely accepted theory that humans’ feelings and emotions cloud and hinder their decision making abilities. However, Elliot, who was incapable of  possessing and expressing emotion, was unable to make decisions. The combination of emotion and judgment creates the foundation for a decision.
Many ancient philosophers believed that homo sapiens were given the frontal cortex as a gift. They believed that the frontal cortex was able to separate reason, intelligence, and morality, from the limbic region of the brain, which is responsible for emotion and impulse. The ancient philosophers thought that this magical frontal cortex gave humans an extreme amount of logic, which enabled us to ignore our feelings when making decisions. This concept is false. The ancient philosophers were unaware that the regions of the brain were not segregated from each other with distinct tasks. The frontal cortex is also associated with emotion, as is the orbitofrontal cortex.
As Antonio Damasio began to study other patients with Elliot’s symptoms, he continued to find that their cognitive abilities were untouched, yet their ability to make decisions was nonexistent.  He found a similarity within all of his patients: the orbitofrontal cortex was either damaged or missing. The orbitofrontal cortex, also known as the OFC, is a part of the frontal lobe that connects instinctive emotion to decision making. Without the orbitofrontal cortex, the brain is incapable of accessing emotion while making a simple choice, resulting in extreme indecisiveness. With a damaged OFC, the brain is no longer able to access the infinite amount of opinions that guide a human’s course of action.
Elliot, an average grown man, not only lost his ability to decide, but also lost his job and family in the process. Elements of his life that he once cared so much about no longer triggered any emotional response, whether it be positive or negative. Without our emotions, we have no means to decide what is logical and what is not. Humans are not irrational, we are emotional. Our emotions do not obstruct our logic, they create it.