When photographer Hannah Price moved from Colorado to Philadelphia, she began to experience something new to her – catcalls from men on the street. After several catcalling episodes, she decided to take action.  She would either snap a photo of the man immediately; or she would talk with him about the incident, and then ask if she could make his portrait. Ms Price created a project called “City of Brotherly Love” from these photographs.

Ms Price states her project is not meant to be an aggressive rebuttal to the individuals in the photos. It is, she states, “just a way of trying to understand it. It was way for me to just deal with it on another level besides avoiding it. Sometimes it’s easier to … just respond….. you just start talking to people, you find out more about them than your initial [impression].” 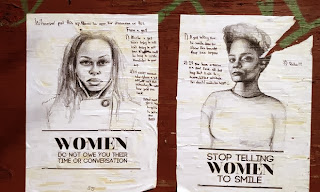 Brooklyn artist Tatiana Fazlalizadeh’s response to her experiences in Brooklyn is very different from Ms. Price’s response with the photography project. She created posters with direct negative messages to the catcallers and posted them around her neighborhood.  Ms Fazlalizadeh states she can’t walk down her street without getting catcalled or harassed. “It happens almost daily to me where I get frustrated or annoyed or upset by something that someone has said to me or done to me outside on the street.”

Ms Fazlalizadeh used her posters to try and rally the neighborhood around her efforts to stop the cat-calling.  She hopes that by calling attention to the negative effects of this behavior, the men will change.

Why does one woman feel okay to take photos and even have a conversation about the experience, and another woman feel anger and frustration?  Our individual responses to catcalls are a result of our thoughts about the experience. If we think: “wow, someone thinks I’m cute.”, “I still have it”, or “this is going to be a good day”, our response may be:  happiness, a big smile, a skip in our step, better posture.

If we think:  “that reminds me of my abusive former boyfriend”, “will he try to come after me?”, “they must think I am promiscuous”, our response may be:  fear, increased heart rate, hunched posture, a frown, anger.

I am not expressing approval of the long-standing phenomenon of men yelling things to women in public places.  My writing about this behavior is focused on the difference in the two responses, not a right or a wrong response.  I believe this is a perfect example of the Cognitive Model theory in action.  The theory is:
Our THOUGHTS about a SITUATION create our REACTIONS, which are EMOTIONAL and PHYSICAL.   In Cognitive Therapy, we focus on our THOUGHTS.  A few of the questions we may ask in therapy about our THOUGHTS are:
What are they? Are they true? How much do we believe them? How do we change them?
Through training and practice, you can learn to control or change your thoughts that create negative reactions.  This type of training has been shown through extensive scientific testing to be an affective way to treat depression, anxiety, OCD, PTSD, and other mental health challenges.  My opinion on catcalling is that, for so many women, the experience generates extremely negative feelings; therefore, I do not like the behavior.  For further information and discussions on ending street harassment see Hollaback!. 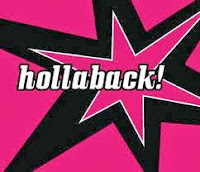 Kat Chow, A Photographer Turns Her Lens On Men Who Catcall, October 17, 2013.

In Honor of Breast Cancer Awareness Month, Give a Mammogram Getting through the Hard Days of Depression
Scroll to top